No-Knead for this yeast bread 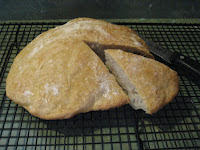 Before the pudding, there is the bread.

And, while making yeast breads is one of my cooking passions, usually my home-baked ones don’t last long enough to be used for a bread pudding.

Recently I’ve been making an incredibly easy yeast bread right from scratch. Now, granted, usually you don’t use the words “easy” and “yeast bread” in the same sentence, but in this case it’s the real deal. The recipe, from the cookbook, Artisan Bread in Five Minutes a Day, by Jeff Hertzberg and Zoe Francois, produces a quick-stir dough that can sit in the fridge for up to two weeks. When you want to make a loaf, just scoop up a handful of dough, shape it, let it rest, and bake for about a half hour. The result is so good, you’ll want to make this one again and again. I usually put a pan of hot water in the bottom of the oven when the bread is baking to ensure a hearty crust.

One thing that makes people nervous about making yeast breads is the temperature of the water – if the water isn’t just warm enough, the bread won’t come out. Pooey on that worry. I don’t use a thermometer to measure; just dip a finger in the water – just warm seems to do it. And it’s a good idea too, to warm up your cold mixing bowl before you add the water – to do this, just add some hot tap water to the bowl, then pour it out before adding the amount of water called for in the recipe.

A friend of mine, Jean Donnelly, subs wheat flour for some of the white in this bread, with great results. She substitutes two-thirds cup of whole wheat for two-thirds cup of unbleached flour. “Yummy with a crunchy, crackly crust,” she raves.

So I say, “Go for it!” If you’ve ever wanted to make yeast bread, this is a great way to start.

BREAD BOULE IN 5 MINUTES A DAY
(from Artisan Bread in Five Minutes a Day, by Jeff Hertzberg and Zoe Francois)

In 5-quart bowl, combine yeast, water and salt. Add all flour, then use wooden spoon to mix until all ingredients are uniformly moist. It is not necessary to knead or continue mixing once ingredients are wet. This will produce a loose and very wet dough.
Cover with lid (not airtight), or plastic wrap with several holes poked into it. Allow mixture to rise at room temperature until it begins to collapse, about 2 hours, but no more than 4 hours.
After rising, dough can be baked immediately, or tightly covered and refrigerated for up to 14 days. The dough will be easier to work with after at least 3 hours of refrigeration.
Remove desired amount of dough from batch and place on pizza peel (or other flat surface) that has been dusted with cornmeal. When dough has rested for 40 minutes, dust top liberally with flour, then use serrated knife to slash a cross or tic-tactoe pattern into top.
Preheat oven to 425 degrees F. Slide loaf onto baking stone or baking sheet. Quickly but carefully pour 1 cup hot water into broiler tray on bottom rack of oven, and close oven door. Bake about 30 minutes, or until crust is nicely browned and firm to touch. Allow bread to cool completely, preferable on wire cooking rack. Makes four 1-pound loaves.
Posted by Portia Little at 12:14 PM