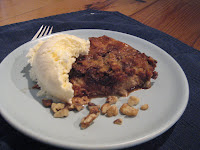 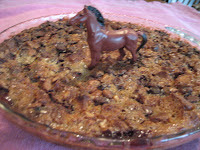 “The Most Exciting Two Minutes in Sports” occurs today as twenty horses leave the gates for the 134th Kentucky derby. And, while some fans of this Run for the Roses will be sipping mint juleps, in our house we’ll be chomping down on a rich bread pudding, laden with chocolate and chopped walnuts.

This pudding is a take-off on the traditonal Derby Pie, which is almost as famous in Kentucky as the Kentucky Derby itself. And while chopped walnuts and bourbon are featured in the standard versions, some also contain chocolate, which without a doubt we had to include.

Baked in a standard glass pie pan, this pudding puffed up nicely while baking, and the chocolate chips melted to a sensuous gooey texture. Now it’s out of the oven and the house smells like a chocolate factory. We plan to cut generous wedges of this luscious “pie” and serve topped with a rich vanilla ice cream.

This one’s for Kas Winters in Arizona, a fan of chocolate if there ever was one. She runs a delightful and informative website, www.winmarkcom.com, which is loaded with family ideas and projects as well as some great gifts – it’s a winner every day.

Let stand about 15 minutes for bread to absorb liquid. Preheat oven to 350 degrees F. Bake 45-60 minutes, or until pudding puffs up and browns on top. Serve warm or at room temp with a big glob of vanilla bean ice cream. Serves 8.
© 2008, Recipe by Portia Little.
Posted by Portia Little at 4:58 PM