Apricot bread pudding is no mystery 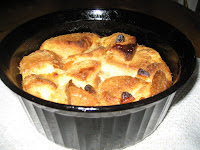 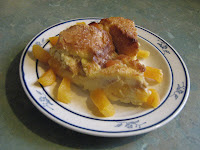 Curling up with a good mystery novel is one of my favorite ways to relax. So when I find one that also includes some great recipes, and ta tum – one of those recipes is for bread pudding, well my day goes from good to better to best.

Recently I discovered Joanne Fluke’s culinary mystery series, starring the intrepid amateur sleuth and bakery owner, Hannah Swenson, who seems to trip over dead bodies almost as often as I find new bread puddings to try. And judging by the titles of some of Fluke’s books, the author must have a killer sweet tooth: Cherry Cheesecake Murder; Sugar Cookie Murder; and Fudge Cupcake Murder, to name a few in the series. You can find these and her other books at http://www.kensingtonbooks.com.

Today we adapted her recipe for Apricot Bread Pudding, which is featured in Fluke’s Strawberry Shortcake Murder. We cut it in half, which still made plenty for dessert tonight and also tomorrow’s breakfast. The original recipe calls for 1/2 cup of chopped dried apricots, an amount that I maintained in the halved version – no need to spare any of this wonderful fragrant fruit. Also, I didn’t remove the bread crusts because I like a BP with texture.

The result was custardy inside and the bread triangles crisped up nicely on top as it baked. Come to think of it, a slice of this BP would be nice right now with a hot cuppa tea on this cool-ish day in Rhode Island.

Butter 2-quart casserole. Remove crusts from bread. (I left crusts on.) Cut each slice into 4 triangles. Melt butter in large microwave-safe bowl, then put in bread triangles, tossing them lightly until coated with butter.
Arrange approximately one-third of triangles in bottom of baking dish. Sprinkle on a third of the sugar and half the chopped apricots. Add layer of half of remaining bread triangles, sprinkle on half of remaining sugar, and add remaining apricots.

Cover with rest of bread. Add any remaining butter to top. Sprinkle with last of sugar. Whisk eggs and milk or cream together in butter bowl. Pour over bread mixture; let stand at room temperature 30 minutes.

Preheat oven to 350 degrees F. with rack in center position. Bake pudding uncovered for 45 to 55 minutes, until pudding is set and top is golden brown. Let cool and serve topped with heavy cream, sweetened whipped cream, or vanilla ice cream.
(The author suggests making this with any dried fruit, including currants, raisins, dates, pears, or prunes, although she said she didn’t try it with the latter.)

Posted by Portia Little at 8:39 PM

My that looks yummy. I have read Chocolate Chip Murder and Strawberry Shortcake Murder. But haven't tried any of the recipes. I have Blueberry Muffin Murder but haven't started it yet.

Rochelle, I love curling up with a good mystery. In addition to Joanne Fluke's books, I also love the Diane Mott Davidson series, and in fact I have them all. Some good bread puddings there too!
Portia

Last week I found a nut roll from Easter in the freezer. It was too stale to eat as is, but too expensive and labor intensive to throw away! I cut it into pieces and made bread pudding. O--M--G!! I plan on doing it with the apricot roll also. It's the Italian in me: 'NEVER throw anything away'!

A nice twist to this:
Make sandwiches with Apricot Jam then proceed as you would following the directions as listed. This makes a great addition!