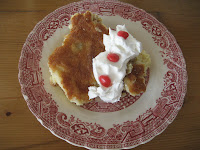 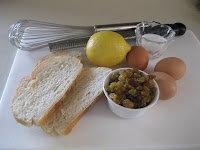 I have just finished the book, “The Tenth Muse, My Life in Food,” by Judith Jones, a memoir from the legendary editor who published Julia Child’s Mastering the Art of French Cooking. With its down-to-earth approach to both food and people, this book provides a wonderful history of American gastronomy, including Jones’ publishing experiences with James Beard, M.F.K Fisher, Edna Lewis, and Lidia Bastianich, to name just a few culinary luminaries.
And, ta tum, Jones is also a huge fan of bread pudding! Ya just gotta love this woman!
In the back of her book, Jones provides a selection of recipes, including one that she calls simply, “Bread Pudding.” She mentions having a bread pudding at a country inn in Wales that brought back memories of puddings she’d had in her childhood. As she talks about the “hot raisins bursting in my mouth, the sensation … so powerful that the tears rolled down my cheeks (adding a little salty flavor,” you have to marvel at her descriptive qualities.
We made the pudding from the recipe in the book and it was indeed delightful, in the way that basic bread puddings are. And this one had the added charm of a hint of lemon, from both freshly grated lemon rind, and also lemon juice. It’s one of those classic bread puddings that will stand the test of time. I used Italian bread slices in this recipe and did not remove the crusts.
Jones provides hints to go along with many of her recipes, such as the one for this dish that she says she found when working with Edna Lewis: “I discovered … how much better crushed sugar cubes are than plain granulated sugar as a topping. They’re particularly good if you’ve stored them in a jar with a vanilla bean.” She also comments that she’s had bread pudding “for breakfast straight from the fridge.” Now there’s a gal after my own heart.
BREAD PUDDING
(a favorite of Judith Jones, from her book, The Tenth Muse, My Life in Food)

Heat the milk with the butter, stirring until melted. Remove from the heat, stir in the crumbled bread, raisins, grated lemon rind, and lemon juice, and let cool to lukewarm. Separate the eggs, and beat the yolks into the milk and butter along with the sugar. Beat the whites in a clean bowl until they form soft peaks, and fold them into the pudding mixture. Season with nutmeg, and turn into a lightly buttered shallow baking dish. Sprinkle the crushed sugar cubes on top. Set the dish in a pan of simmering water, and bake in a preheated 325-degree oven for 1 hour. Serve warm with a pitcher of heavy cream.
(From The Tenth Muse, My Life in Food, by Judith Jones, 2007)
Posted by Portia Little at 8:48 PM

Thanks for the idea I can't wait to try it.

I hope you like this delightful bread pudding. It's lovely and lemon-y.

Hello -
I am a filmmaker in Atlanta. I just wanted to let you know I produced a 21 minute documentary about Miss Edna Lewis. The film is called "Fried Chicken and Sweet Potato Pie". It contains extensive comments by Judith Jones about her personal and editorial relationship with Miss Lewis.

It is viewable in its entirety on Internet at a Gourmet Magazine website:

My website, http://bbarash.com/bb_friedchicken.htm has more information about the film and the story of Miss Lewis.

Bailey, I just viewed your documentary about Miss Lewis - what a wonderful way to honor such a great cook, and person! Thanks for sharing the links.