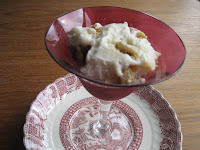 Of course there can never be too much bread pudding. But sometimes when you’ve overextended yourself and baked a humongous pudding, it’s just possible that there may be some left over.

What to do? Kristin in Canada shares this recipe for bread pudding ice cream. Which is just what the name suggests – chunks of any kind of your favorite bread pudding stirred into a likewise favorite ice cream. We tried it and it’s wonderful – you crunch down on some frozen bread pudding chunks as the creamy ice cream dissolves on your tongue. You can make your own ice cream using this recipe, or just use a good store-bought variety and mix in the bread pudding pieces, then freeze for a while. This actually reminds me of a flavor of ice cream they used to call ‘frozen pudding,’ but which is now referred to as ‘rum raisin.’ The possibilities with this treat are limited only by your imagination. They should all be as easy as this one.