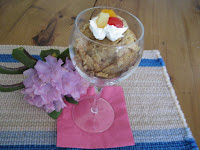 It’s time to enjoy our favorite summer drinks. But why not try them out a new format?

Did we say ‘bread pudding’? You bet your dog days of summer we did! Today’s bread pudding is enhanced with the wonderful ingredients from that tropical beverage – pineapple, cream of coconut, and rum, and laced with a fragrant raisin-pineapple-lemon-peel mixture that’s absolutely divine.

And one of the best parts about this one is that you don’t have to heat up the house to make it. Put the ingredients in your slow cooker in the morning, then let ‘er go on LOW for several hours. Or on HIGH for a while, then down to LOW for the grand finale. As with all the slow cooker puddings, or in fact any slow cooker recipe, I always like to check from time to time to make sure it’s not clinging to the edges or getting too crusty.

I made some changes to this basic recipe when I put it together today. For one thing, I did not remove the crusts from the bread – like who, on a hot day or any day, is going to bother! And I for one do like some ‘crusty’ texture in my bread pudding. Also, I found that you really don’t have to puree all the liquid ingredients and bananas separately – just toss them all in the blender or food processer together and blend until they get to the puree stage. If your puree machine doesn’t hold all these ingredients in one batch, however, just do them in two separate blendings. The point I’m trying to make is that you don’t have to measure out exactly half the liquid each time.

We’ll have to be patient. We started this one around noon, so it won’t be ready until almost suppertime. Here’s to beating the heat and summer bread puddings!

In blender or food processor, puree half of following: drink mix, pineapple juice, evaporated milk, cream of coconut, and bananas; pour into large bowl. Puree remaining half of liquid ingredients with eggs and liqueur. Combine purees.

In bowl, combine raisins, pineapple with juice, and lemon peel; set aside. Place about two thirds of bread cubes in slow cooker that has been buttered or sprayed with cooking spray. Top with 1 cup raisin-pineapple-lemon peel mixture. Top with remaining bread, then remaining raisin mixture. Pour pureed ingredients over all. Poke in several places with knife to release air bubbles and make sure liquid and bread are combined. Cook on LOW about 6 hours. OR, cook on HIGH for 2 hours, then LOW for 2 to 3 more hours, or until pudding is puffy and slightly browned on top, and set. Serves 8-10.
Posted by Portia Little at 1:00 PM